Forex: What is it?

You have probably heard that the Forex market is the largest financial market in the world. The Bank for International Settlements (BIS) has found that the foreign exchange market accounts for $6.6 trillion in daily trading volume. The NYSE - the world's most active stock market - has a daily trading volume of only $18.9 billion.

You may be kicking yourself right now for not learning about this huge financial market, and we're here to tell you about it. But don't forget to be careful, because the Forex market is risky and there are more losers than winners - it is estimated that around 90% of traders lose money.

However, understanding this is a good starting point for joining the club of the remaining 10%. 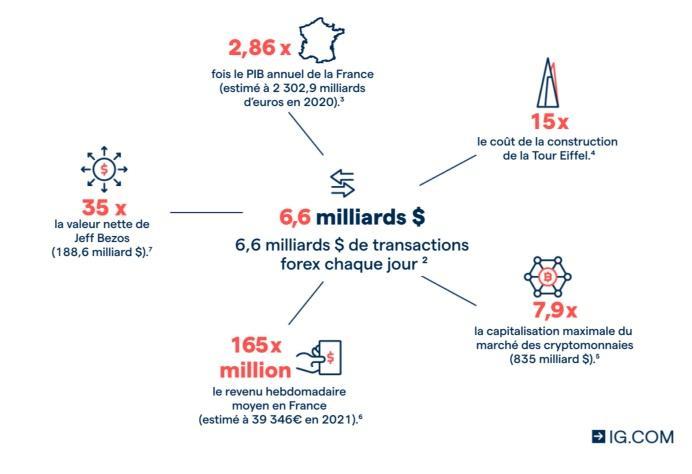 If you have ever travelled to another country, you will have had to exchange your currency for the local currency. For example, if you are travelling from France to the UK, you will need to convert your euros (if you had cash) into pounds sterling. It's the same concept in Forex, except you do the exchange online.

Forex traders essentially do the same thing, except this time they do it for speculative purposes. Speculation means that you have no real need for the currency you are trading, but you want to profit from the change in its value. For example, if you think that the pound will appreciate over time, you will use your euros to buy pounds which you will then convert back into euros later when the value of the pound has risen enough.

In the foreign exchange market, currencies are assigned a three-letter symbol known as the ISO 4217 currency code established in 1973 by the International Organization for Standardization (ISO). The first two letters represent the name of the country and the third letter is the name of the local currency. For example, the US dollar is represented by USD while the Canadian dollar is represented by CAD. The euro (EUR) is unique in that it represents both the region (Europe) and its currency.

These currencies are also given nicknames by traders for easier identification, for example :

The first thing you will notice when you start trading is that currencies are not listed individually, but rather in pairs, such as EUR/USD. This pair simply represents the price of one currency against another. In this case, the EUR/USD pair compares the relative value of the euro to the US dollar. So when you buy the EUR/USD pair, you are essentially buying the euro while simultaneously selling the US dollar. The currency on the left is the base currency and the currency on the right is the quote currency.

Imagine that you are travelling from the United States with US dollars in your wallet to France, where the euro is the local currency. When you exchange your dollars for euros at the airport, you simultaneously sell your dollars to buy an equivalent amount in euros. On your return, you do the reverse by selling the EUR/USD pair - selling euros for US dollars. That's foreign exchange trading in a nutshell, and that's what you'll be doing when you do the same transaction from your phone or computer.

They are called the major currency pairs because they are the most liquid. Liquidity refers to how often an asset is traded and how easily it can be converted. For example, although the real estate market is huge, it is considered illiquid. In contrast, because the US dollar is involved in almost 80% of all foreign exchange transactions, these currency pairs are very liquid, hence their title of 'majors'. They are so heavily traded because these countries have close economic ties and many transactions take place between them.

The second category of Forex pairs is known as minors. They are not as frequently traded as the majors, but the countries involved still have a lot of trade and, therefore, are moderately traded. Here are some of them:

Finally, we have the exotic pairs, so called because at least one of the currencies in the pair is from an emerging economy country. In theory, there could be one currency pair for each country, but there would be too many pairs to list. So the main exotic pairs are those for Mexico, Brazil, Turkey, South Africa, China, Russia and a few other countries. Here are some of them:

One of the main differences between the foreign exchange market and the stock market, for example, is that the former operates 24 hours a day from Monday to Friday, whereas the stock market, such asEuronext Paris, opens in the morning and closes in the afternoon.

This is mainly due to the overlapping time zones in the different countries, which causes the market to be split into trading sessions. In addition, as countries have different cultures and holidays, the market remains open and trading continues.

Another unique feature of the Forex market is that it is not run by an exchange. Foreign exchange transactions are made directly between buyers and sellers. This is known as the over-the-counter (OTC ) market , as transactions do not go through a central operator.

How does Forex work?

For the foreign exchange market to develop, several actors need to be involved.

While the FX market is indeed the largest financial market, many people often forget how small the retail segment is. FX swaps account for the majority of trading volume, while the spot market accounts for $2 trillion per day. Even so, the retail segment is estimated at between $200 and $300 billion, which means that it is a small part.

With this in mind, it is obvious that the biggest players in Forex are the large banks and multinational companies that use multiple currencies. These companies trade billions of dollars every day, which is why the Forex market has become so important, and they would have no need to trade with an individual with little capital.

Yet we still trade with a capital of $100 or less thanks to Forex brokers. The broker provides the link between you and the interbank market, allowing you to trade in the foreign exchange market. They do this by partnering with some of the largest banks to access this interbank market with their vast resources.

The largest Forex brokers have hundreds of thousands of clients. So even though each client has only $1,000 in capital, together these funds represent a significant amount of assets under management (AUM). This gives Forex brokers leverage and access to the interbank market, allowing you to trade with the world's largest banks.

In return for their effort, Forex brokers charge either a spread or a commission or both. The spread, as described in a previous section, is the difference between the bid and ask prices. For example, if the EUR/USD exchange rate is 1.11245, the broker will represent this as 1.11245/1.11255. The difference between these two values is the spread (1 pip). This difference is paid by the individual trader on each trade.

Commission-based pricing is simpler, simply a fixed percentage charged according to transaction volume.

Before the internet, traders had to phone their broker to place buy and sell orders. But technology has made it possible to conduct all activities from your computer or smartphone. Your broker will provide you with a terminal to access the foreign exchange market, and it is through this terminal that you will receive market quotes and send your orders.

What is a Forex trading strategy?

You will often hear that the key to success in Forex trading is to have an effective strategy. Every business needs a plan to be executed properly, otherwise it would be chaotic. This is true for Forex trading, and perhaps even more so, as it is your money that is at stake and therefore you need a plan or trading strategy.

Therefore, you need to have a systematic method of approaching the markets for every transaction you make. There are many considerations that need to be taken into account, including:

It takes time to develop an effective trading strategy, which can only be done with practice. Most brokers offer a demo account that uses virtual funds while providing the full trading experience. It is a bit like pilots using a flight simulator to practice flying a plane before they take off.

Trading exposes you to the same risk of loss as deposits and is only suitable for sophisticated clients who have the financial means to bear the risk.

Furthermore, past performance is not a reliable indicator of future performance. The value of an investment can go down as well as up.

Thus, the User is solely responsible for the use made of the acquired information and assumes all risks associated with such use. In particular, it is up to him to take all necessary measures to preserve the integrity of his capital.

Finally, by using the Site and the Social Networks, Users acknowledge that they have read, understood and accept without reservation its General Terms of Use.

Investment at risk
Welcome to Robot-Trade.com

The site aims to present the referenced investments.